In current television audio and video transmission projects, 4K system becomes a trend. Now some broadcast media integrator has used 4x3G-SDI in their TV transmission since 4X3G-SDI could build a 12G-SDI 4K transmission system with resolution of 4K@30Hz or 4K@60Hz.

According to SMPTE standard, 4X3G-SDI could have two types of output format to accomplish a full 4K 12G-SDI picture. One format is SQD which outputs quad different picture from one source 12G picture. That means SQD 4X3G-SDI outputs four different pictures from 4 channels of SDI BNC ports. In Quadrant Mode (Square Division) you can input (for capture) or output four channels of SDI HD 1080 or 2K video at 30 fps or less, representing individual quadrants of the higher definition UltraHD 3840x2160 or 4K 4096x2160 4K formats.

Another format is 2SI which outputs the same quad picture to be superimposed into a full 4K picture. This means 4X3G-SDI of 2SI format has four same picture of 1920X1080 resolution  output from 4 channels of SDI BNC ports. The system designers must be clear of what format is the SDI resource like SDI capture , SDI fiber converter, SDI matrix switcher, SDI mixer, SDI camera, SDI decoder and so on so that the whole broadcast transmission system could run without compatibility problem. Two Sample Interleave is an alternative method to organize the data of SDI UltraHD and 4K formats. Instead of dividing the picture raster into quadrants, this method samples pixels to create four lower resolution versions of the entire picture. Of course some devices may be compatible with both formats. 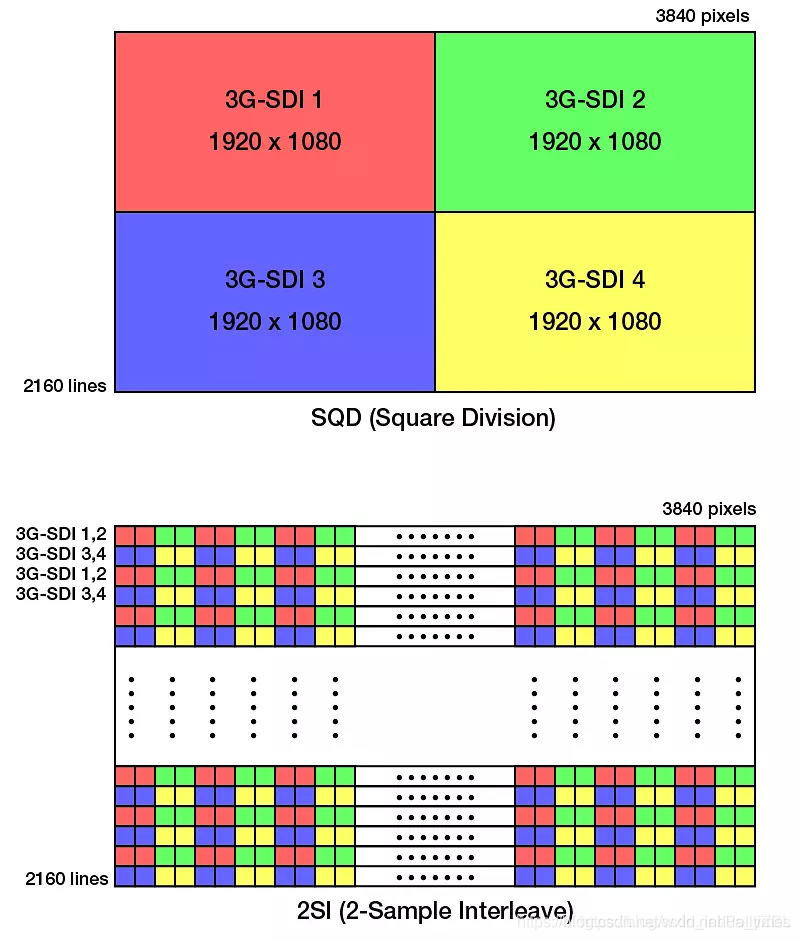 Sound synchronization is also important for broadcast system. In 4K 4X3G-SDI type system, embedded audio is in the first channel of SDI no matter it is SQD or 2SI format. So when you build a system or update a telecast transmission system, you’d better to know the devices output SDI format from head to end in order to avoid compatibility problem in choosing SDI gears